Key topics in this post include: what ARR is, how it's calculated, and how you can set an accurate ARR goal for your business.

Annual recurring revenue - ARR - is the amount of revenue a SaaS business makes in a year from its subscribers. It's one of the key metrics for all subscription businesses and the main indicator of a company’s size, growth stage, and, ultimately, valuation.

If you’re a business that charges customers on a monthly basis, ARR is just your monthly recurring revenue (MRR) x 12.

How To Calculate ARR

Calculating your ARR is straightforward.

Just add the total amount of subscription revenue and factor in churn, downgrades, expansion, and upgrades. If you would only bill annually, have no churn/downgrade, and no upgrade/expansion, then with 10 clients who each pay $10,000 annually, your ARR would be $100,000. Simple.

Small complexities will be tied to your business model and pricing strategy, but the underlying mechanics are the same.

If you have a mix of monthly subscriptions and annual contracts, then you need to segment your ARR by type , factor in churn, downgrades, expansion, and upgrades for each to get to your ARR.

Let’s imagine a B2B SaaS business called Company ABC. Company ABC uses a subscription model and offers multi-year contracts to their customers. Here’s how they would calculate ARR from one of those contracts:

If the contract spans multiple years

If ABC bills on an annual basis, then the ARR formula is simple:

If the contract term is in months

If ABC bills customers on a month-to-month basis, the calculation is also quite simple:

For example, if a customer is paying ABC $500 a month for their services, their ARR can be calculated as:

Obviously the two examples above only illustrate ARR in the context of a single contract. To actually calculate the ARR for your business, you need to create an ARR build. This is a bottom-up model that factors in your entire customer lifecycle to help you arrive at an accurate ARR figure.

Below is a simplified example of an ARR build. For a more detailed approach, please check out this real-life example from Figma. Their model segments ARR more granularly by cohort, giving you a more in-depth understanding of the build process. But for a more baseline understanding, take this hypothetical example where we want to calculate the Net New ARR for company ABC.

During the course of that year, they will gain additional revenue from new customers, that's their New ARR.

They might expand the revenue from existing customers (add-ons, upsells, and reactivations). This is their Expansion ARR.

They will also lose revenue from downgrades, cancellations, and customer churn. This is their Contraction ARR.

Then calculating the Net New ARR is simply:

$85,000 is just their net new ARR for 2022. We also need to add in the starting ARR from the beginning of the year to get our final ARR number for 2022. Thankfully, that calculation is simple:

As stated above, Company ABC had $150,000 in ARR at the beginning of 2022. Their final ARR number could then be calculated as.

A couple of ARR benchmarks

While it’s obviously important to meet, (and ideally exceed), your own ARR projections, it’s also essential to look at broader benchmarks. This helps you understand how your business is performing relative to other SaaS companies of a similar size.

The chart below from SaaS Capital shows the median ARR growth rate for companies from 2021 vs. 2020. 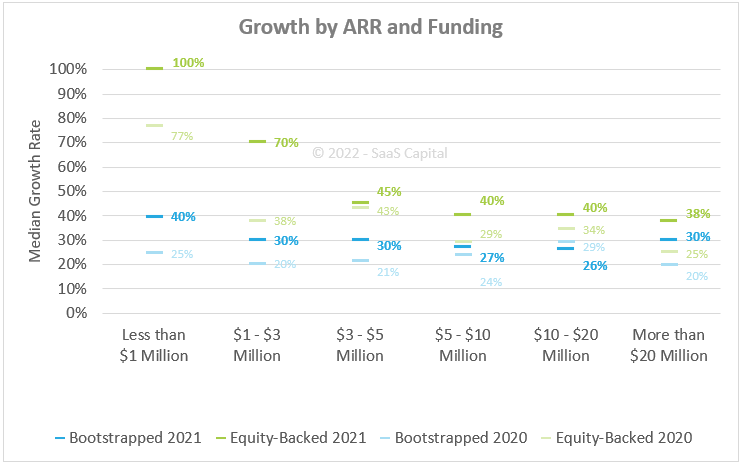 Companies in the latter category tend to grow at a much faster rate given the additional financial backing they have at their disposal.

Bootstrapped businesses however tend to be more profitable despite the lower rate of ARR growth, as they are not financially beholden to outside stakeholders.

Meanwhile, this chart, also from SaaS Capital, offers a comprehensive view of 2022 revenue per employee benchmarks for private SaaS companies. 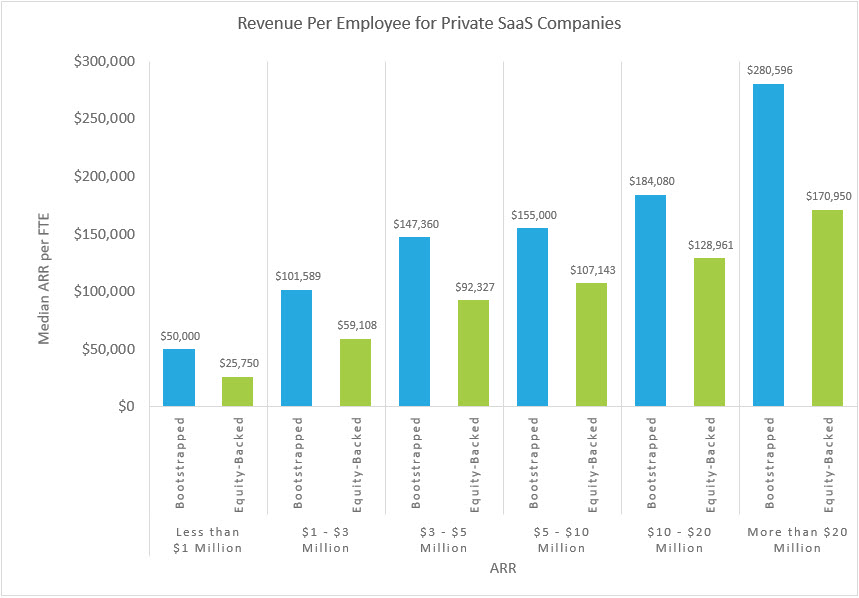 Equity-backed ARR per employee figures are lower in part because bootstrapped businesses generally have to operate with fewer employees and lower budgets in the early stages.

Use these graphs to understand how your ARR figures compare to others. It’s by no means a binary indicator of success, but rather a baseline on which you can evaluate the health of your business in the broader context of B2B SaaS.

The only spreadsheet with
built-in connections to any database, versioning, and collaboration.